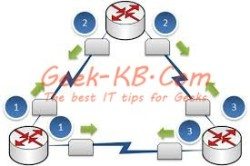 In this article, How To set a static route in CentOS/RHEL 6.x I will explain when it is necessary to use a static route and how to set it up. Static routing is a type of method of network routing. Static routing in not actually a routing protocol a manual configuration on the network route. This is usually managed by network system administrators. In linux, static routes can be added and deleted using the route command. But the drawback is when a Linux server is rebooted or when the network service is restarted, it will forget the static routes configuration. To avoid network interruption on the Linux server, you can configure static routes to take effect immediately without rebooting and also should apply after the next reboot. Static routes that apply after next reboot is called Persistent Static Routes. To achieve this on a CentOS/RHEL 6.x server, the following steps should be performed:

The command to add a static route is:

Once you verify that the route is working properly you are ready to make it a permanent change.

To apply the configuration on next reboot or after the next network service restart, create a file called static-routes in:

And add this line:

Hit Ctrl+X to save the file.
Now you can safely reboot your server or restart the network service without worrying that the route you added will disappear.

I hope you liked this article, please feel free to leave comments or ask questions.