How To: read a CentOS / RHEL core dump file 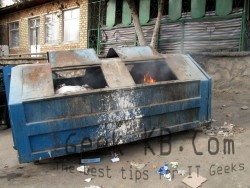 How To: read a CentOS / RHEL core dump file

How can you read a core dump file?

From wikipedia: In computing, a core dump (in Unix parlance), memory dump, or system dump consists of the recorded state of the working memory of a computer program at a specific time, generally when the program has terminated abnormally (crashed). In practice, other key pieces of program state are usually dumped at the same time, including the processor registers, which may include the program counter and stack pointer, memory management information, and other processor and operating system flags and information. Core dumps are often used to assist in diagnosing and debugging errors in computer programs.

The term “core dump”, “memory dump”, or just “dump” has become jargon to indicate any storing of a large amount of raw data for further examination.

Unfortunately, once in a while a Linux server may freeze or ‘get stuck’ and when you check /var/log/messages you see that a dump file (vmcore) has been created.
In order to read that file, follow the next steps:

3. Find the current kernel-debuginfo package which is installed and remove it:

6. Now we can read the crash dump by running ‘crash’:

In this article we’re teach you how to Install and Configure Cacti on CentOS/RHEL 6. Table of Contents Some info from Wikipedia:System Requirements:The steps are as follows:Let’s Begin!Step 1 – Install the Cacti software on CentOS/RHELStep 2 – Configure MySQL serverStep 3 – Create the Cacti MySQL database:Step 4 – Create a user called ‘cacti’ […]

How To: Install CentOS 6.4 step by step with screen shots in 16 steps

How To: Install SVN on Linux CentOS/RHEL 6.x

This tutorial will  show you how to install subversion server (SVN) step by step and publish it in Apache in CentOS/RHEL Linux. So first, a quick wiki: Apache Subversion (often abbreviated SVN, after the command name) is a software versioning and revision control system distributed as free software under the Apache License.[1] Developers use Subversion to maintain current and historical versions of files such as source code, […]